More details here on the FB event. Please share and invite others.

IT’S NOT TOO LATE

BUILDING ON OUR MEETING ON 22nd AUGUST,

Fighting for the estate and the people who live here

Sick of leaks and other problems not being fixed?

The council has a duty to provide you with a decent standard of accommodation, whether you’re a long-term, secure tenant or are being housed here temporarily.

Some blocks have had major works done recently (new roofs, rewiring etc) even though they’re all earmarked for demolition. Others have been neglected and run down in order to make those of us who still live in them miserable and desperate to move out.

Come along and find out how what the law says, and how to make the council do the necessary repairs.

Where are we supposed to go?

We’re being told to use Homesearch, but find there’s very little available. We’re also going to hear from some people who have been decanted already, from Wolverton/ Bradenham/ the Heygate estate.

Find out more about the drawbacks of accepting a Housing Association place, or a private landlord, or a “shared ownership” arrangement, and how to refuse these options.

We’ve invited residents from the “First Development Site” to tell us what’s been happening to them (the security guards, fencing-in etc) and to explain more about the ongoing Public Enquiry.

This is a legal challenge to the council’s attempts to use “Compulsary Purchase Order” powers to buy the leaseholders’ flats from them, and is likely to delay any demolition from starting for at least another year.

It sounds as though Phase 2 will also be delayed, so those of us who don’t want to leave our homes have another year or two to get organised, and fight the council’s plans.

This meeting is a chance to meet your neighbours, from other blocks as well, and talk about what we can do.

Together we are stronger

– let’s fight for our estate! 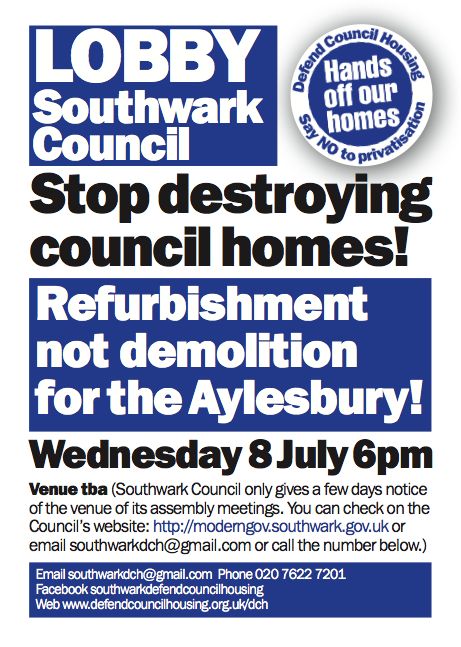 4 day public inquiry (starting Tuesday 28.4.15) into the Compulsory Purchase Order and the Aylesbury redevelopment, open to the public and held at the Millwall Football Club Conference Centre from Tues 28th to Fri 1st (10am-5pm), adjourned and resuming on Tues May 12th, now adjourned again, to resume sometime in the Autumn. For an idea of the issues dealt with at the Inquiry, this copy of the Objectors’ Opening Submission sets out their arguments very clearly.

The Aylesbury Occupiers were very busy: see their website for the archive of their many events, and watch out for more soon https://fightfortheaylesbury.wordpress.com/

“The Future of Council Housing” – a hot topic, eh.  Piers Corbyn has a resolution to share:-

At the next Elephant Amenity Network Meeting

Here’s a good read about our march on the 14th

Family-Friendly Gathering of Resistance at the Aylesbury Occupation

Come together –  Yesterday the courts decided to make the occupiers homeless – so we’re uniting, defending against an imminent eviction.

Thousands on the March for Homes. Occupation of Aylesbury Estate.
Come & discuss what’s next with:

Where are we going to live?
How can we build a mass radical movement for better housing?

** All welcome! Please note a crèche will be provided **

Occupation of empty flats in Chartridge

Come and find out more!

A multitude assembled at City Hall

A BIG, BIG THANK YOU TO ALL THOSE WHO MADE IT TO THE MARCH!

Whether or not you braved the cold and the rain to march today –
this is so much easier – please do add your name and sign this!

Come and join our feeder march,
setting out from the Aylesbury at 11am!

We are just a small part of this big event – see here for more details: http://marchforhomes.org/

‘Stand up for council housing’

There will be 2 deputations to the cabinet meeting at 4pm, in the Ground Floor Meeting Rooms:

And the SGTO are sending a delegation (6 delegates) to support their
‘Six Alternative Pledges’ – the main concern is that we want A NET
INCREASE IN THE NUMBER OF COUNCIL HOMES..

Here’s a report back on this packed meeting about the future of the Aylesbury, hosted by Southwark Group of Tenants Organisations (SGTO)

Can we stop the demolition of our council homes?

What should be the future of the Aylesbury?

HERE’S A CHANCE TO LEARN SOME LESSONS FROM THE HEYGATE
(SCROLL DOWN FOR MORE TO READ ON THIS TOPIC):

‘ELEPHANT ENDANGERED’: RECORDED CONVERSATIONS AND SOUNDS,
AN 8-SPEAKER SOUND INSTALLATION
OUTSIDE 56A INFOSHOP,
FROM 4 -6PM

PUBLIC HOUSING UNDER THREAT FILMS:
56A INFOSHOP, FROM 7PM

LEARNING LESSONS FROM THE HEYGATE:   The 2008 Southwark Plan states that  50% of all new homes in Southwark should be ‘affordable’ – and this WAS the  first promise to Heygate residents of what the Heygate regeneration would deliver

Now, with the latest Elephant and Castle planning application,  the officer’s report argues  that on-site social housing will bring down the value of the private homes and Lend Lease are only guaranteeing a minimum amount of 25% ‘affordable’ housing

and only 10% for social renting

Residents were promised the opportunity to move into 16 early housing sites away from the Heygate.  Only 1 was ready before the 2009 deadline issued to tenants to move.  By 2012 only another 6 were completed.

A few leaseholders stayed living on the estate until 2013.  They prepared a strong legal challenge to get a fair price for their homes and Southwark took their time to issue Compulsory Purchase Orders  against them,

What are the lessons for the Aylesbury?

1. Genuinely affordable housing (in particular, family housing) is being demolished.

2. Do not rely on Council and Developer paper promises.

3. It’s worth standing up for your rights.

for more info. about the campaign for GENUINELY affordable housing in and around Elephant and Castle see http://35percent.org/blog

The launch of ‘Staying put: an anti-gentrification handbook’

If you would like to attend, please let the organisers know. 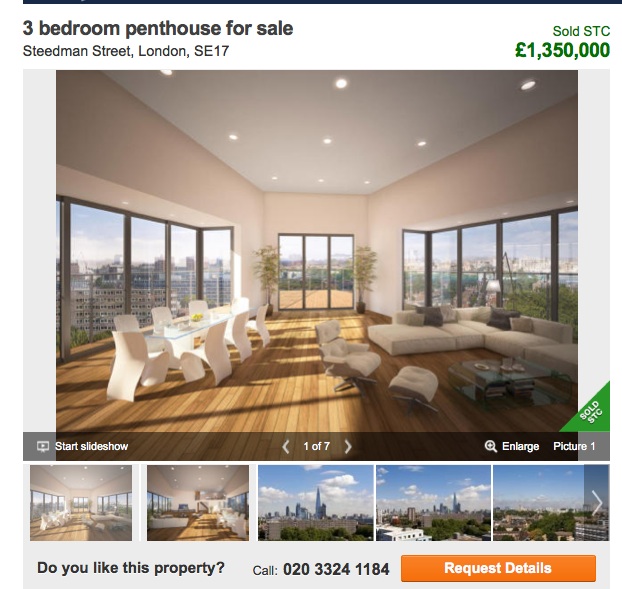 Staying put: an anti-gentrification handbook is a result of collaborative work between Just Space, Southwark Notes Archive Group, professor Loretta Lees and The London Tenants Federation, and is designed to help local communities faced with gentrification of their council estates.

The handbook explains what gentrification is, how communities can resist it and alternatives to demolition and displacement. It contains ideas, stories and resources gathered from the experiences of tenants, leaseholder and the wider community organising around the council estates in London (including the Aylesbury).

On Saturday 7th June, People’s Republic of Southwark will host the screening and discussion about Concrete Heart Land, documentary film about the social cleansing of the Heygate.

Assembled from 12 years of archive materials the film charts the struggles of the local community. Some of the footage, such as excerpts from the Compulsory Purchase Order inquiry, have never been made public before.

As Aylesbury itself is part of the ‘regeneration programme’, the film and discussion will be a great opportunity to consider what has been done to Southwark residents on the former Heygate, share your own experiences and thoughts on whether the future of the Aylesbury can be different.

For more information about the film please go to http://concreteheartland.info/

Aylesbury Tenants and Leaseholders First
are teaming up with the good folk of Southwarknotes
(http://southwarknotes.wordpress.com)
and the People’s Republic of Southwark
(http://www.peoplesrepublicofsouthwark.co.uk)
to present a fact finding day about the ‘regeneration’ and gentrification of North Southwark and Elephant and Castle.

Lunch and tea will be provided,
and there will be time for walking around the Heygate Estate and the Better Elephant permanent exhibition.

Details of how, where and when to meet are here at this link at Southwark Notes .  Come along for the whole walk, or just for a part of it.

Thank you to all who came, and to all who helped organise this. Despite the rain 35 people turned up! And at 4.30 didn’t want to stop but were up for more. Watch this space!